Recently we’ve shared memories and old pictures from our past. You sent one to me that I had forgotten and lost; not surprisingly, it has strongly affected me when I saw it again. It was one of the first photos you emailed me of you (if not the actual first one). You are above Watson’s Bay on a place you dubbed “The Rock.” You are bold and confident with a yellow sweater wrapped around your shoulders looking so debonair. Your arms are spread wide, and the beautiful Sydney skyline is behind you.

I love this picture for what it represented to me in my mind at the time. There you were a tall, dark-haired man whose smile pierced through the screen into my soul. Good grief you were so young and sure. Your open arms seemed to beckon me forward as if welcoming me into your life in a symbolic invitation that I so desperately wanted to accept right then and there, but neither one of us was looking for anything of that nature. Our feelings were just beginning to emerge and our relationship was growing and maturing. We were content to take it slow and enjoy the process of unraveling the mysteries of who we both were.

I could finally connect that rich, deep voice to a face, and it was a perfect match. I remember thinking that if those arms were to wrap around me, I’d never want to leave the safety of their circle. To be hugged and held in those long arms was a fantasy and dream. I escaped to that dream often. I found comfort in it and in you.

We’ve shared many significant hugs that I know will be talked about at some point. I dream of your hug now. I can’t even fathom being held in your arms again. 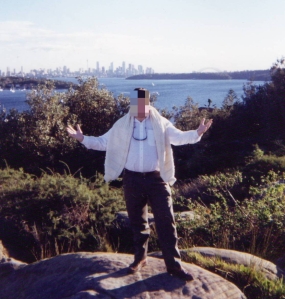 How truly wonderful that you remember that photo so fondly, I remember when it was taken and the photographer. At the time I had no idea it would become part of your life.  I have a definite memory of emailing it to you however, I had to choose it carefully. I had hit an age and my vanity and ego were a little fragile as somewhat evidenced by my choice. A little paunch had developed and maybe some love handles. The sweater, or jumper as we would call it here, nicely disguised the later of the issues and the front on pose to the camera disguised the other.

The jumper itself holds a special place in my heart. As you are already aware it was hand knitted by my dear old mother. It is one of those things that I treasure. My mother who only left this world a little over eighteen months ago, just 3 days shy of her 90th birthday, would be pleased to know her handiwork still has an admirer. It means a lot to me that you speak of it so warmly. Having said all that I must admit to feeling it to be faintly preposterous that we imbue an inanimate object with such affection. However when you search across the void that is the world wide web you clutch on to every subtlety, every nuance to ensure you garner the very last drop of meaning out of every exchange and intimacy shared.  On a more light hearted note you will be pleased to know that it still fits, even if there is less room to move within the garment itself.

You are right however when you say that when I sent you that picture it was not an overtly intentional invitation to come join me. We were certainly growing closer, but there were many things that could prevent us from being together, the most obvious being the Pacific Ocean and the 12,600 kilometres that stood, and still stands, so firmly between us. I’d love to think that I was sending you some subliminal message even then. It’s nice to think that you saw it so. You say we were content to take it slow and let the mysteries unravel. I certainly agree with that on an emotional level. But the rational side of us fought that feeling, not hard or particularly well, but there was a fight nonetheless. The fact that we gave in and let our emotions run rampant is a testimony to how strong our bond became.

You say it was your fantasy to be held in those arms. Well it was my fantasy to hold you. You and I both know that we fulfilled both of our fantasies on that particular front. Yes we will talk of that time as this story unfolds. But I must say it saddens me a little to hear you say you cannot fathom being held in my arms again. That is however my cross to bear. As we grow closer through this process, far closer than we have been for many many years. I am inextricably drawn to you; I can’t help but hold on to some utterly unachievable goal that one day we may share that simple pleasure again.

Unfathomable isn’t impossible, it’s just hard to imagine after so much time has passed. I want to insert our favorite Downton Abbey quote here, but it has an ironic, cruel twist to it in this context.

You are much too critical concerning your physical appearance in my favorite picture, and I take great offence to it. You looked wonderful to me.

I miss your mother. I missed her for years, but I shall expound on that later.

The Downton Abbey quote (season 4 episode 3) while barbed is perfectly correct. I think “I blame you” could not have been used in a more appropriate manner. Sure it hurts but there is real humour there and what we always did best was laugh, not only at each other but ourselves.

As for my concerns about my appearance. it was not denial or even being a little down on myself. I was just ensuring that I appeared to you in the best possible light.

And I miss my mother too. As you say we will no doubt expound on that at some later point.